From 1812-1814 Britain made several invasions to recapture her lost colonies during the War of 1812.  Many historians refer to this war as America’s “Second War of Independence”.  Britain allied herself with Native tribes and Canadian Loyalists and returned for another attempt at gaining her territories in the New World.  The British had actually invaded and taken control of Washington, D.C. – setting many public buildings ablaze (including the White House).

It was during this war that the “Star Spangled Banner” was written by Francis Scott Key, describing the valiant defense by American Patriots against the British Navy near Baltimore in 1814.

Britain was still the most powerful military force in the world with respect to numbers and artillery.  And her naval forces had landed in Louisiana with the intention of seizing New Orleans.

Most Americans are familiar with Johnny Horton’s popular ballad “The Battle of New Orleans”, telling the story of American patriots fighting alongside General Andrew Jackson as they advanced along the “Mighty Mississip’”.   What many don’t know, however, is who in particular protected New Orleans and gained victory in that final and decisive battle against the British “Red Coats”.

Of course, it was a dedicated group of volunteers.

And it ended the war, sending the (paid-professional)  British military back across the Atlantic for the last time.

Andrew Jackson (known as “Old Hickory”), was a native of Tennessee.   Many of the soldiers in the Battle of New Orleans were volunteers who came from his own state.  They weren’t paid large sums, or promised pensions or given healthcare benefits.   They simply observed that there was something worth doing and went ahead and did it.  A huge number of these dedicated volunteers came from Tennessee, so it came to be known as “The Volunteer State”.  And it was this group of fearless volunteers  - inspired and lead by General Jackson - that protected the country from British invasion.

Undoubtedly, many of the most important accomplishments and the most important jobs and the most important achievements -are done by volunteers.  The early presidents and statesmen -the Founders….were seldom paid or given recompense for their contributions.  They had other careers as farmers, lawyers or tradesmen.  They volunteered themselves for public service, since they saw there were things that just simply needed to be done.  They may not have seemed very valuable to the people of their time, since they were going against the grain.   They included Washington, Jefferson and Madison.  And what about Buddha, Jesus, Ghandi, ML King, and so many others?  What about a helpful  Aunt or a willing Uncle?  Seems Civilization itself rests on the back of volunteers.

It is evident that we would not have 90% of our Fairs if it weren’t for the efforts of volunteers.

So, if volunteers are so valuable, how do we get them and keep them?

A volunteer is someone who is willing.  In fact, the origin of the word volunteer is the Latin Voluntarius, which means “willing”.  The words voluntary and volitional  also have the same Latin root.

This is likely the key to why volunteers can be so effective.   They are willing.  They have reasons and purpose for being part of the group.  They might want comradeship, they might want to further the aims of a fair, they may wish to help the community, they may want to educate people about agriculture or they may wish to help protect and preserve the Fair tradition.  Whatever their purpose is, it is a higher goal than financial reward.  And it makes for a dedicated, effective team player.

So, the key is to accept their willingness to help.  Expand that willingness.  And direct the willingness, without crushing it.

Most volunteers simply want to be acknowledged for their efforts and contributions.   Any effective General knows that a Medal of Honor is worth far more than many tens of thousands of dollars to a loyal soldier.  Those acknowledgements are a must.  Certificates, medals, awards, pins or other acknowledgements are important.  They show the volunteer he is appreciated.   They demonstrate that he is valued.

Fair/Festival Association Conventions can be used as a reward to volunteers – especially the executive strata for the event.  Hopefully, the duties and details of Fair Management can be taken care of swiftly while at the convention so that a day or two can be devoted to “Fun & Frolic” at the location of the convention.  This is a valid reward for volunteers, particularly if at least part of the trip’s purpose is leisure.

A volunteer appreciation banquet is always a good idea.  It need not be costly or extravagant if the budget is tight.   But remember how much the Fair is saving in employee compensation and benefits by having these valuable volunteers on board.  Don’t be afraid to give it the necessary budget allocation.  Of primary importance that your leader (Executive Director, President, etc.) stand up in front of the group and tell the volunteers how much they are appreciated.  They need to be acknowledged.   Special validations to particularly dedicated or helpful individuals need to be voiced.

Finally, consider utilizing your GROUNDS ENTERTAINMENT at such a volunteer appreciation event.  The best time is at the beginning of the Fair (on the first day, before the gates open….or the evening before opening day).   This is because most of your volunteers will be available to attend.   Once the fair opens, t hese people will be busy.  Feed them some food (everybody likes to eat – it’s something we all do), and remember to be unrestrained in your commendations from the President/Director.   Hand out awards or certificates.  Then have some live entertainment catered especially to the volunteers.

Don’t be afraid to request an extra show from one of your Grounds Attractions for this purpose.

It’s a good way to utilize an asset that you’ve already paid for.   And many volunteers will be too

busy over the course of your fair to sit down for a moment to enjoy the entertainment
once the fair opens.

We need to support our troops.

And the troops that deserve the biggest acknowledgement are our dedicated volunteers.

I’m sure General Jackson would agree.

Wade Henry
Wade Henry has been performing his act at Fairs across the U.S. & Canada for over 20 years.    He specializes in Stage Shows, Street Performances and Strolling Entertainment.   He has delivered over 10,000 shows throughout his career at hundreds of Fairs, Festivals and Exhibitions. 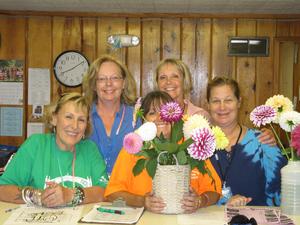