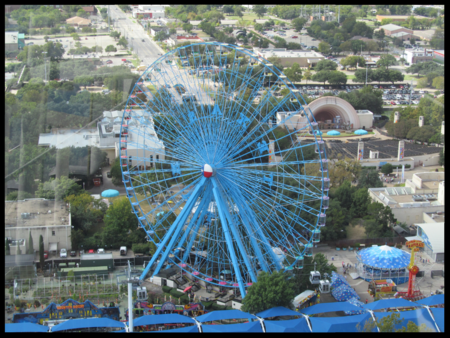 
Do your fair attendees find their way to all parts of your event?

Do you have unbalanced crowd distribution across your grounds?
Are there parts of your fairgrounds which seem empty….whereas other areas are densely populated?

There are methods for putting control on traffic flow.     A fair manager can design his/her layout with this in mind.

I remember being in the administrative office with the manager of a well-known fair in the Midwest.    On the wall was a large photo of the grounds taken from an airplane during a fair in the 1970’s.    The layout looked familiar – even 40-years later.    Of course, there were some changes:  the grounds had grown and there were a few buildings missing .    The most interesting thing in the photo were the people.   You could see the bodies:  little groupings of people scattered around.   Some were on the carnival midway, some around the food pavilion…..an audience at an outdoor stage and so on.

What amazed me was that the density of people was so different from one area to the next.    We looked at the map and commented on it.   Some areas had people.   Other areas were empty.

If you were to get an exterior view of your grounds, how would it look?    A “bird’s-eye-view” can be very revealing.

​With an exterior view, efforts can be made to make your “people distribution” more ideal.      Have you just been doing the same thing year-after-year?    Should something be changed?    Once the “ideal scene” is known, certain methods can be applied to achieve it…..or reinforce it.

Attractions such as Stage Shows, Strolling Acts, Stationary Acts and Concerts have long been used to manage crowd flow and even out densities.    They are called “Attractions” because, well……they attract.     They can be used to distribute attendees around the grounds.

Imagine a large map of the grounds on a table.   Scatter a few hundred coins around the map – those coins are the “attendees” .    Now, imagine you have half a dozen magnets.   Now, place the magnets where you want people to congregate.     Those magnets are your attractions.    This can all be done conceptually.   Here’s your “crowd control”.

(And hopefully, your “magnets” are powerful enough to pull “coins” onto the map from off the grounds and elsewhere!)

With all this in mind, here are some tips:

For very large attractions such as concerts and other ticketed venues, plan the layout so that attendees MUST walk through the grounds to get to the stadium/arena entrance.     This ensures your “concert-goer” will also be a “fair-goer”.  You always want your public to have the whole fair experience.

A famous example of this is the State Fair of Texas.    The 92,000-seat           Cottonbowl sits in the middle of State Fair Park.    The fair hosts 2 highly-attended college football games during the run of the fair.    Every game attendee has a long way to walk across the grounds from any of the fair’s multiple entrances.    The football fan always gets a fair experience just by coming to a game.

Many fairs are great at this.    The Allentown Fair (PA) has a stadium for concerts.    The front entrance to the stadium is deep within the middle of the fair.   The Schaghticoke Fair (NY) and the Steele County Fair (MN)     have similar designs.    These are very successful long-running fairs.

Spread your other attractions out so that people are distributed logically.     It seldom makes sense to bundle all your entertainment into one single area.    Rather than have an “Entertainment Area” it usually makes more sense to have themed areas such as “Kids Zone”, “Ag complex”, “Food Court”,   “Commercial Exhibits”,  “Livestock”……and then have nearby entertainment that is well-fitted for each category of public.

If you have vendors/exhibitors who are unhappy with traffic volume, a good plan is to direct a Strolling Act to        generate activity.     This brings more people to the area and also makes them stay longer.


With some intelligent design and a little planning, the fairgoer can be given an extraordinary fair experience that includes all that each fair has to offer.