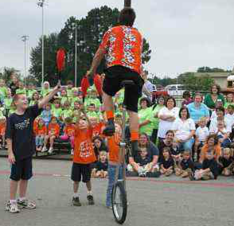 Often, when we think of effective promotion for a Fair, Festival or Event, we think of slick ad campaigns sent over the media channels of radio, TV or Highway Billboards.   These campaigns can be expensive.

However, here is a way to promote your fair at no cost.  I have seen this program boost attendance at Fairs across the country.  Perhaps you have already implemented the "Magic Formula".  If so, perhaps you will want to reinforce and expand it on a larger scale.  If not, well, here's the write-up - based on observation of Fairs and Expos that have made it work:

The "formula" involves inviting your local schools to bring their students for an educational tour of the fairgrounds.  This can be done early on weekday mornings - as field trips - when the fairground isn’t yet open to the general public.

All that is needed are a few attractions to be ready for the groups when they arrive.  A petting zoo and a couple of entertainment attractions make for a wonderful program.  If your fair has livestock, 4H and/or educational exhibits, well then that would make an even more incredible field trip for a school.  Most fairs already have all the ingredients to make a “School Tour” program work.

The Titus County Fair and the San Angelo Livestock Show (both in Texas) have this “School Tour” formula down pat.  It allows them to showcase their Fairs to hundreds (or even thousands) of young people in a very short period of time…..while utilizing their fairgrounds at otherwise dead hours.

Promoting to Kids
Many fairs don’t realize who their best salespeople are out in the field.  Of course, the best salesperson for a fair is a KID.  Indeed, some adults bring their children to the fairgrounds simply because the kid(s) know the fair is in town and will persist with the “hard sell salesmanship” (so characteristic of kids) that will get them there.

Ever notice how persistent a kid can be when asking for something?

Have you noticed how advertising for many cereals and other foods are directed – not at adults (who buy the food)….but to children?

Once a kid knows what he wants, his enthusiasm for it can become virtually unkillable.  The kid is then transformed into a salesperson for that product or service.  And he will nag his parent(s) until they submit to the whim.   And in some families, there isn’t even any resistance.

So the question becomes – How do you reach the kids in your promotional actions?  With all those carnival rides, bright lights, games, entertainment and animals – kids clamor for the fair experience.  If they know the fair is in town, they will bring parents, family and friends.  They don’t have driver licenses of their own – so they will always bring a group.


Showcase the Fair
The very best way to accomplish this is to have the school arrange buses and bring the kids to the grounds in the morning hours before the fair opens.  The kids are sectioned into manageable-sized groups and rotated around to a few stations by their teachers/chaperones.  They get a taste of a few things the fair has to offer, whetting their appetite for more.

This way, you can expose yourself to HUNDREDS OF KIDS AT A TIME.

The kids will see livestock, get some education about animals/agriculture, experience some entertainment and have a great experience.  All in a couple of hours.

Yet, they will also see all those rides and food stalls and other attractions that aren’t yet open.  They will want to come back.  And they will tell their parents all about it.

The Magic Formula
Here’s the formula for establishing a “School Tour” program:

1.    Select a couple of entertainment attractions that you are already paying to be at your fairgrounds.  Ask them to donate extra entertainment during the"School Tour Program." Shows don't need to be long….abbreviated shows are best (10 min).  That way, hundreds (or even thousands) of kids can rotate and see a few different attractions.

3.    Contact the schools in the local area and invite them to the Fairgrounds for a field trip. Emphasize the educational benefits of showing kids the animals and/or agricultural displays.  The school will provide their own bus and teachers to manage the groups.  Indicate that this is a once/year opportunity for the kids to see what is happening in their community - with no gate admission - and to see the displays and the animals in a hands-on way.

4.    When the groups arrive, have a fairboard member direct them in a logical rotation.


Summer Fairs
Does your Fair run in July or August, when school is out?  In this case, there may be another place where large groups of kids congregate.   Many private schools do operate through the summer or at least further into the summer than the public school system.  Libraries, summer camps, recreational centers and churches are another possibility.  The key is to find out where they are.  Have a “Youth Day” and invite them for the tour.

Attendance Booster
The “School Tour Program” achieves outreach into the community.  It achieves goodwill.  It also provides education to the students.  But, also, don’t forget – it will act as a very, very effective promotional action that will benefit attendance during regular hours.

Providing a morning or two of school tours will inevitably result in HUNDREDS of salespeople equipped to return home and sell your event to their families.  And these salespeople, by their very nature, will be some of the most persistent and enthusiastic salespeople you could possibly have.

THE MAGIC FORMULA FOR ZERO