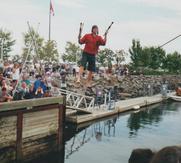 Wade Henry has been developing his various performing skills since he was a child in Winnipeg, Canada.

Graduating from the University of Western Ontario in 1993, Wade took an unconventional path and decided to find adventure as a world traveller.

Initially, he funded these travels as a world-class street performer, delivering his shows on the streets, town squares and harborfront areas of various Australian, Canadian and U.S. cities.

His travels as a performer are partially documented in his popular adventure novel "The Greatest Finale".  (See Merchandise page).

It wasn't long before the Fair & Festival Industry picked up on Wade's abilities as a spectacular grounds act.

He is an accomplished juggler, unicyclist, ropewalker, fire eater, equilibriast, magician and comic.  Wade is also a master of the skilled art of handling an audience.

Wade is married to Helen Henry,
Singer/Songwriter.  They have 5 kids (all grown) and 2 grandkids.

The Henry Family lives in Clearwater, FL.  Wade & Helen continue to operate "Ability Entertainment", the company that serves to book shows for Wade's act, as well as several other entertainers.

Wade is a proven veteran and master of both stage and strolling performances.

Over the past 20 years, the "Wade Henry Show" has been phenomenally popular with Fairs and Festivals.  He has performed over 10,000 shows and continues his prolific outflow of entertainment today.

With the tallest unicycling act on the Fair/Festival circuit, a daring approach to his life and work - and top notch professionalism - you can see why he's known as "The High Roller". 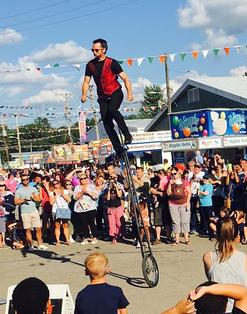